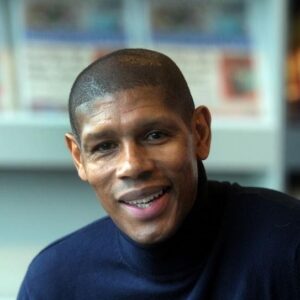 After a career spanning over 20 years, mostly spent at West Bromwich Albion, Sheffield Wednesday and Leeds United, Carlton Palmer finally retired from playing in 2005 after a two-year spell as player/manager at Stockport County.

A determined, hard-working player who covered a lot of the pitch in his playing days because of his long legs, Palmer was unfortunate to be on the losing side in three Wembley finals (an FA Cup and League Cup with Sheffield Wednesday and a League Cup with Leeds United).

Internationally, he was a favourite of former England manager Graham Taylor in the early 1990’s winning 18 caps and representing his country in the 1992 UEFA European Championships.

Moving into full-time management with Stockport County after hanging up his boots, Palmer endured many difficulties off the pitch and despite putting together a talented young side his win record of 25 games in 90 matches was not good enough to keep him from the sack in 2003.

He was back in football a year later when he was appointed manager of Mansfield Town but resigned just under a year later after a difficult start to the new season with only six points on the board from their first nine games.

Away from professional football coaching, Palmer has participated in many football programmes over the years as a pundit and analyst including Final Score on the BBC, ShowSports and the Football Channel.

In December 2016 Palmer had to undergo life-saving heart surgery after what he described as a ‘major shock’ and a ‘bolt from the blue’. The exact details as to what happened are unknown but the operation took five hours with surgeons having to reach his heart through his groin.

In October 2017 he released his biography It is What it is: The Carlton Palmer Story which is not just about football but an intimate portrait of the man himself, told with honesty, wit and plain-speaking intelligence.

After five years working in China as director of football at the Wellington College in Shanghai he returned to English football in 2021 when he joined current side Grantham Town as manager.