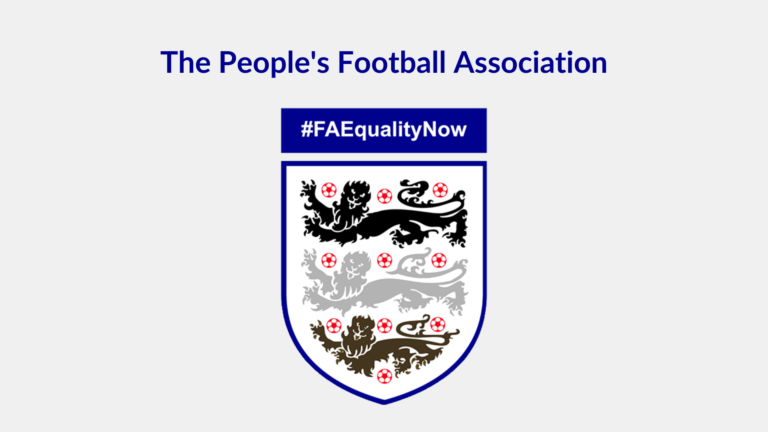 The #FAEQUALITYNOW campaign group wants to make the biggest changes to football’s governing body since it was founded in 1863.

In its current form, the FA is not fit for purpose. Former chairman Greg Clarke typified the culture at the football governing body by making inappropriate and racist remarks; while there has been institutional failure regarding child abuse, safeguarding and the Sheldon report; not to mention dementia.

Football involves players, coaches, referees, the parents of youth players and fans, accounting for more than seven million people according to the FA.

The FA has neither the modernity of approach nor independence required to modernise its own governance nor exercise regulatory control over football.

The FA’s decision-making structures are arcane and convoluted leading, to a lack of clarity and steeped in vested interests, intransigence and short-termism.

The FA Council is outdated, with a representative from each of the armed forces, public schools and Oxford and Cambridge Universities. We have 17 life/senior Vice Presidents, most of who have been there since the 1980s. Should the FA really be a private members’ club.

Changing the structure and composition of the FA is the platform to create a level playing field.

Meanwhile, the Premier League wields soft power throughout the FA and the football family, directly funding the PFA, League Managers’ Association, Football Supporters Association (FSA) Kick It Out and the Football Foundation.

In the latter they also are part of the governance – do we really want the Premier League to have this type of control?

#FAEqualityNow believes that the government must address these significant shortcomings in the Football Association’s structure, composition and articles of association.

In June of this year #FAEQUALITYNow presented a substantial submission to the Government fan-led review, chaired by Tracey Crouch.

#FAEQUALITYNOW have today publicly published its ‘#FAEQUALITYNow Blueprint For Change’ plan which will make English football truly accessible and open for all, both now and in the future.

Nigel Fletcher – Co-Chair of FAEQUALITYNow: The Football Association needs to be independent, not an association of vested and competing interests. We need a publically elected Football Association that we are all proud off. An FA which has the backing of the public and fans. This is long overdue and we have to move away from a Victorian/19th Century constitution. The last 30 years the Premier League have just about controlled every facet they need to within the FA and English Football family. Our #FAEQUALITYNow blueprint not only exposes the problems, but has a clear proposed solution of which we hope Tracey Crouch adds to her final government fan-led review of football report, ie significant reform of the FA and as a first step an independent regulator to start to make wholesale change of the FA.

Mickey Ambrose – Co-Chair of #FAEQUALITYNow and former Chelsea and Charlton Athletic player: The public and fans have lost faith in The Football Association. Most organisations would not survive such institutional failure, time and time again, whether child abuse, dementia (safety), diversity and inclusion. The list goes on. It is why the FA needs to be independent and why government must now finally intervene.

Paul Stewart – #FAEQUALITYNow group member and former Liverpool, Man City and Tottenham player: On child abuse and safeguarding, the FA have again swept it under the carpet with the same narrative, apology and blame of the previous regime. We are now pleading to the government to intervene to ensure football is a safe environment for all. We also call for the President of the FA, Prince William to be vocal on this matter, for an inclusive, public-led, independent FA in the future. Or is he content for an elite, Victorian, vested interest FA to continue under his patronage? We need our future King to speak up on his vision of what the FA should be.

John Stiles – FAEQUALITYNow group member and former professional of Leeds United and son of 1966 World Cup hero Nobby Stiles: The FA is a dinosaur. We need to extinct the current structure and the outdated status quo. In place we should openly debate the #FAEqualityNow blueprint as the reformed structure. The Football Association is responsible for my father’s death and public health crisis by not putting in place adequate controls and mechanisms to safeguard football players at all levels. They continue to put players’ lives in dangers in dancing over the issue.

Carlton Palmer – #FAEQUALITYNow group member and former England international: The Football Association have failed in so many ways over many generations. The FA make Diversity and Inclusion a central tenet of their overall strategy. Who are they kidding? Because of the governance issues in English football, the FA have no baseline data on how many black coaches have their UEFA A, B or Level 2 coaching licence. How many British Asians are playing in the 92 professional clubs at different levels? The list goes on. There is no baseline data. It is a lot of noise and fancy brochures/videos and all their strategy is flawed regarding ethnic minorities.

#FAEQUALITYNow – the People’s Football Associaton is similar to a modern-day version of the Netflix drama, The English game. Two centuries ago, there was a power struggle between the independent schools elite and the northern mill towns.

Today’s issue is that the equality struggle is bringing the Football Association in the 21st century for everyone and to be truly inclusive – the central tenet of the #FAEQUALITYNow blueprint.

To read the #FAEQUALITYNow blueprint and its final submission to the Government Fan Led review of Football, please visit www.thepeoplesfa.com