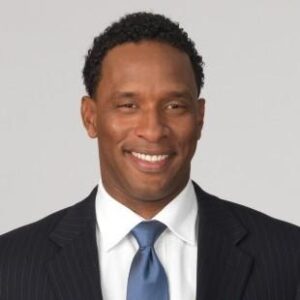 Shaka Hislop is an ESPN Soccer analyst and standout former professional football (soccer) player who, as a dual national citizen, played for both England and his native Trinidad & Tobago, making history as the starting goalkeeper on the T&T national team’s first ever World Cup match in the 2006 FIFA World Cup. He was also the first member of the Trinidad & Tobago World Cup squad to be inducted into his country’s Sporting Hall of Fame.

Shaka is Honoury President of Show Racism the Red Card (SRTRC)  an anti-racism education charity, established in England in January 1996 to harness the high-profile nature of footballers as anti-racist role models to educate against racism throughout society in the United Kingdom. Celebrating now 25 years since he made a donation of fifty pounds

Show Racism the Red Card started in North Tyneside and now has offices in the United Kingdom as well as other countries. SRtRC produces educational resources including DVDs, education packs and magazines for use with young people, delivers workshops in schools, teacher and adult training and holds educational events with football clubs.

Shaka appears as a pundit on ESPN FC, ESPN’s daily global football news, information and highlights program. He joins former English Premier League stars Craig Burley and Steve Nicol, former Major League Soccer players Alejandro Moreno, Herculez Gomez and Taylor Twellman, for lively discussion and analysis of global football’s hottest topics on daily ESPN FC shows, exclusive on ESPN+. Hislop was in the same role for ESPNSoccernet Press Pass, the football discussion show which aired on ESPN Sunday to Thursday throughout the Caribbean and around the world on ESPN International’s English-language networks. He is also a co-commentator ESPN International’s telecasts of the Premier League, La Liga and Serie A, amongst others.

Shaka played over 400 games in combined league and national team competition during his 15 year career. The vast majority was in the Premier League as a goalkeeper for Newcastle United, West Ham, Reading and Portsmouth. During his time at Newcastle United the team placed second in the Premier League for two successive seasons under Kevin Keegan’s first tenure. He also played under manager Harry Redknapp at Portsmouth and for England under-23s, along with being an unused substitute in one England friendly. Shaka retired from football in 2007 after a successful season with Dallas FC in MLS.

In addition to his ESPN broadcasting career, he spends time with emerging soccer talent as goalkeeping coach for Quinnipiac University.